Largo, FL (July 9, 2021) – A Georgia man was taken into custody following a deadly DUI accident in Largo on Thursday, July 8.

Local reports disclosed that the fatal crash occurred near the crossing of 137th Street and Walsingham Road at around 5:56 p.m. An initial investigation revealed that a yellow Jeep Wrangler driven by 23-year-old Aveon Harris of Georgia ran a red light at the intersection, crashing into a white Toyota Prius. The operator of the Prius reportedly had a green light and the right of way.

The female driver of the Toyota was subsequently taken to Northside Hospital where she was later pronounced dead. Harris reportedly sustained no injuries in the impact. Local authorities reported that he exhibited signs of intoxication and was arrested for DUI manslaughter and vehicular manslaughter. The identity of the deceased party has not been revealed at this time.

An ongoing crash investigation is being managed by local officials. More details will be made public as the inquiry continues. 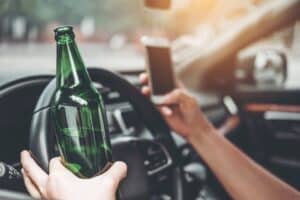 According to the National Highway Traffic Safety Administration, a drunk driver kills one person every 52 minutes in the United States, culminating in approximately 28 deaths per day due to drunk driving accidents. According to government estimates, drunk drivers cause about 10,000 fatalities on America’s roadways each year. In 2016, over a quarter of all fatal accidents happened when a motorist was under the influence of alcohol. After a deadly crash, surviving family members should consult with a Tampa wrongful death attorney to discuss lost compensation.

Your existence will not be the same after losing a loved one in an unforeseen accident, and the repercussions may be devastating to your mental and financial well-being. Many people are confused about what to do after a loved one dies in a car accident, and even more are unaware of how to get the compensation they deserve. Families of those who have died as a consequence of an unexpected tragedy can seek justice with the aid of a skilled Florida personal injury lawyer.

It’s critical to choose a wrongful death attorney in Tampa who can assist you with every element of your case or claim, including financial assistance. The decision to engage a wrongful death attorney with extensive expertise is an important first step. Our legal experience has taught us how to effectively represent families whose loved ones have been killed in a Florida car accident. Rebein Law has a history of assisting grieving families. We want to assist you in holding the negligent party accountable and ensuring that you are fairly compensated for any losses you have incurred as a consequence of a terrible car accident.

Attorney Paul Rebein should be contacted as soon as possible at 813-305-7285 to learn more about how we may assist.