Wesley Chapel, FL – Three Vehicles Fatally Strike One Man on I-75 near I-275

Wesley Chapel, FL – Three Vehicles Fatally Strike One Man on I-75 near I-275

Wesley Chapel, FL (October 29, 2022) – A portion of southbound I-75 in Pasco County reopened on Thursday over nine hours after police closed the roadway in order to investigate a collision in which three different cars hit a 41-year-old man, taking his life.

The incident occurred at around 5:00 a.m. on Thursday, October 27, according to information provided by the Florida Highway Patrol. The man, who was from Tampa, and his 20-year-old son were traveling south on I-75 in a 2002 Ford Expedition when the vehicle experienced a malfunction, a news release read.

They headed onto the shoulder and exited the vehicle. The father attempted to cross the interstate, according to information from police. He was first struck by a van driven by a man, age 66, from Inverness. He was then hit by an SUV driven by a Brooksville man, age 54. Finally, he was struck by a pickup truck driven by a man from Port Richey. All three drivers stopped to render aid after the accident occurred.

The man lost his life at the crash scene, sources said. His name has not been released. Authorities are still investigating the details.

We offer our sincere sympathies to the family of the deceased victim. 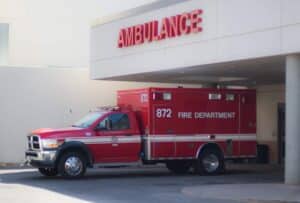 Approximately 400 people lost their lives in pedestrian crashes in Florida between January and June of 2019. According to these statistics, Florida is one of the deadliest states for pedestrians in the country. Millions of people are drawn to the Sunshine State each year due to the many attractions the state has to offer.

Unfortunately, pedestrian accidents in Wesley Chapel and across Florida happen often. In a study completed by Smart Growth America, Florida ranks number one out of twenty states that were examined based on how many people are hit and killed by vehicles each year.

Negligent drivers continuously place pedestrians at severe risk of injuries or even death. If you or someone in your family were struck by a car while you were walking, standing, or riding a bike, you should call a personal injury lawyer. The lawyers at Rebein Law can help you collect financial compensation after another person’s negligence caused your injuries. We will negotiate with the insurance companies for a settlement that will help you recover. You can turn to our experienced personal injury lawyers to help you fight for justice and your legal rights.

The law office of Rebein Law consists of a skilled and experienced team of lawyers who work hard to provide justice for victims and the families of the wrongfully deceased. If you have recently lost someone you love in an auto accident caused by driver negligence, wrongful death attorney in Wesley Chapel can hold them accountable for their careless actions. The sad truth is that no matter how vigilant we try to be in ensuring the safety of ourselves and others on the road, we cannot predict the behavior of other people.

A skilled lawyer from Rebein Law will be able to answer any and all questions you may have. They will help you to navigate the complicated legal process around filing a wrongful death claim and work diligently in order to hold the negligent party responsible for your loss accountable.

Call Attorney Paul Rebein at 813-305-7285 to speak with a wrongful death lawyer about your case if you have lost a loved one in a car accident.